We Are Not Smarter Than Hunger

So this video came across my Tumblr dash, and it triggered a rant.

This is an interesting example of the placebo effect, for sure.  However, it is now being bandied about as “You can change your metabolism with your miiind!”  And, predictably, people are discussing it almost solely in the context of weight-loss dieting.  As if it offers hope.

Because I’d like it preserved for posterity, here’s what I said on Tumblr (with a few minor edits):

The fact that this works for one feeding with a single milkshake means nothing.  It’s basically a trick to fool your body into feeling fuller, temporarily, but it says nothing about how your body treats hunger over the long term.

END_OF_DOCUMENT_TOKEN_TO_BE_REPLACED

Last night I had a dream I was in some sort of godforsaken upscale organic food market place, like Whole Foods, and this really cute woman in a nice suit came up to me and tried to sell me her weight loss plan thing. 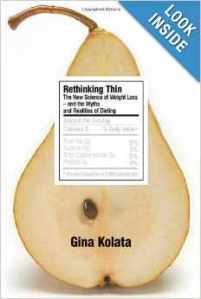 Rethinking Thin by Gina Kolata was the final clue-by-four.

And she kind of backed up and sat down in a chair that was by the wall, eyes wide, and I felt a little bad for being so angry so I explained the whole deal to her. I told her I was an eating disorder survivor, that my body was nobody else’s business unless I chose to make it so, that I might not be happy with it but that it still deserved love and shouldn’t be starved, and that what she was doing — I was adamant on this point — was genuinely hurting people.  And she needed to stop encouraging people to do this to themselves.  And if she was doing it to herself, she needed to stop it.

I told her about the books I’d read that set me straight, took her notebook away and wrote down the names and titles, and gave it back. And because it was a dream, I knew that I had planted the seeds of doubt, and that she would change her mind and stop doing what she was doing.

And I think that was a pretty amazing dream to have. I literally wasn’t buying what she was selling.  I’ve had other dreams like it, but that was especially good.  A dress rehearsal for when I have to meet the new doctor I’ll be seeing late this month, I guess.  I’ve already called the office and explained the deal, and I explained it again on my intake forms, but that doesn’t always do the trick.

So yeah, I think that’s a victory of some kind.  We are at the mercy, in dreams, of what we really think about ourselves.  There’s no filter there.  And yet, all this time, it’s been in dreams I’ve seen the first flashes of acceptance.  Meaning it’s been there the whole time, quietly growing without me knowing about it.  A dream like this is proof of that.  Proof of how far I’ve come.

I am pleased.  I am really pleased.

I'm a gamer, writer, painter, faker,
sparkly custom pony maker,
bipolar profaniteer;
so much more than you see here.
Buy a ticket, come and see
the beasts in my menagerie.